A California man got out of his car. Then a giant boulder crushed it

These satellite photos show how different regions of California have transformed after a series of atmospheric river storms dumped heavy rain and flooding into the state in January.

(CNN) -- A California man has recounted his near-death experience after he narrowly avoided being crushed by a boulder in his car.

Mauricio Henao was sitting in the driver's seat of his parked car in Malibu, California, on Tuesday, Jan. 10, when he received a phone call. He left the car to take the call -- and then heard the sounds of massive rocks tumbling down the hillside. 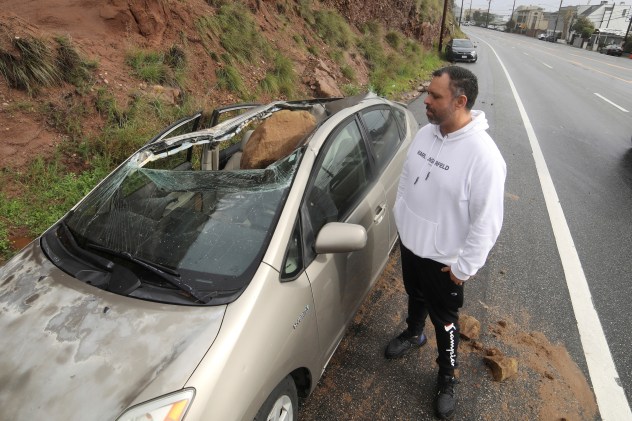 "I just heard loud crashes," said Henao, according to CNN affiliate KTLA. "And I ran out and saw my car just crushed."

Dramatic photos show Henao's Prius with the roof caved in by the four-foot boulder.

"The rock is the size of the whole hood," Henao said. "The windshields are all broken and the frame of the car is just all twisted."

Debris from the hillside fell across four lanes of traffic, according to KTLA. While no one was injured, several other cars were also damaged by rocks falling down the hillside.

Henao told KTLA that the terrifying incident along the Pacific Coast Highway left him feeling distraught.

"I'm pretty shook up," he said, according to KTLA. "Honestly, I don't think I'll park here again after this. I'm a little traumatized by this whole ordeal."