Early-season storm to bring heavy rain across the Pacific Northwest

The wet season is going to start with a bang in parts of the Pacific Northwest into this weekend as a potent cold front moves through.

The front will help bring a cool stretch of weather into early next week, but the rain from Friday into the weekend will be the bigger story this time around.

The heaviest rain will be focused from Friday into Friday night as the front works its way through the Northwest. 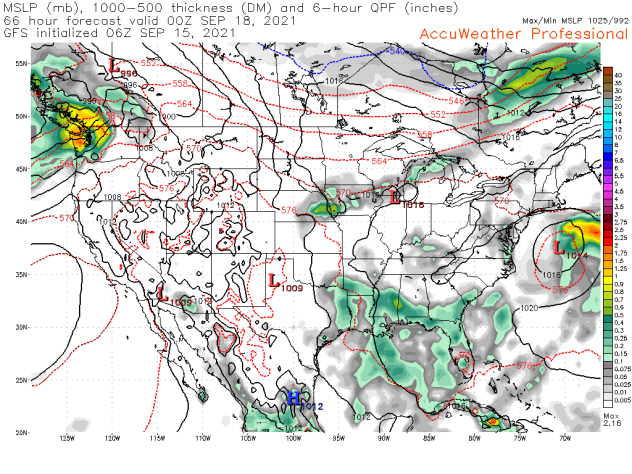 That 996 mb low pressure system near the British Columbia/Alberta border is a pretty potent storm for this time of year, so the front has a little more punch with it as a result.

Behind the front, an upper-level trough swinging through will bring additional opportunities for rain through the weekend. 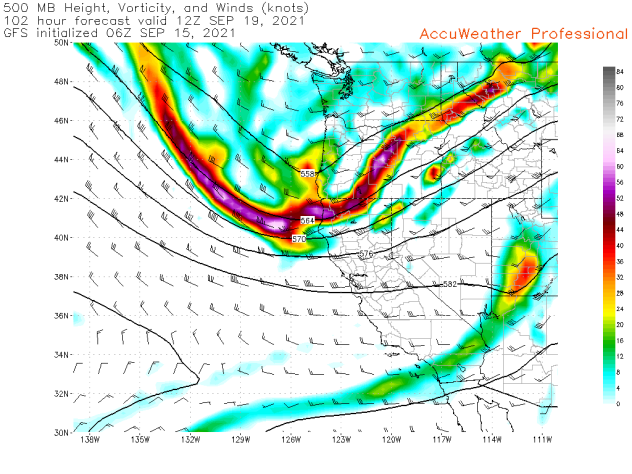 As the trough lifts out to the east into early next week, drier weather will return. Before that happens, though, this setup will help bring some heavy early season rain to Washington and Oregon from the Cascades westward. Much of that area will receive 1 to 3 inches of rain, with locally higher amounts in the high terrain of the Cascades and the Olympics.

Even the ensembles have been picking up on this heavy rain event, with the GFS ensembles showing about 2.5 inches of rain in Seattle from Friday to Sunday and about 2 inches in Portland.

When the ensembles show such a strong signal during the medium and longer range, it gives us more confidence in how a storm will play out. Here is the GFS ensemble mean rainfall from Friday through Sunday: 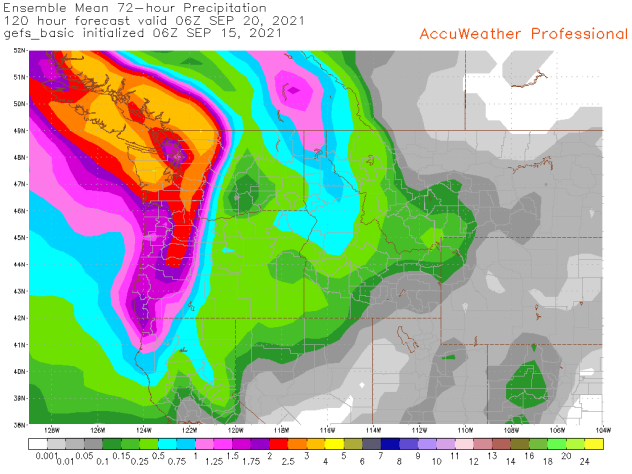 Again, this looks like a forecast rainfall map more out of late autumn or winter rather than September.

Just how anomalous is this? The average rainfall for the entire month of September in Seattle is 1.61 inches. The average is 1.52 inches in Portland and only 0.48 of an inch in Medford, where an inch of rain is possible this weekend. Even into Northern California, where Crescent City averages 1.26 inches of rain during the month of September, the rainfall from this weekend alone may exceed that. There may even be some light rain into the San Francisco Bay Area, something that is not that common with September storms. San Francisco averages just 0.07 of an inch of rain in September.

Even well inland where the rain will not be as heavy, let's look at Bend, Oregon. The city averages about 0.38 of an inch of rain during September, which is about what we expect that area to get with this event. With the 0.41 of an inch of rain from last week's event, you end up with a pretty wet September overall.

This rain will be a HUGE help for the firefighters fighting dozens of large fires across this area. This will help to at least put a small dent in the drought across much of this area. 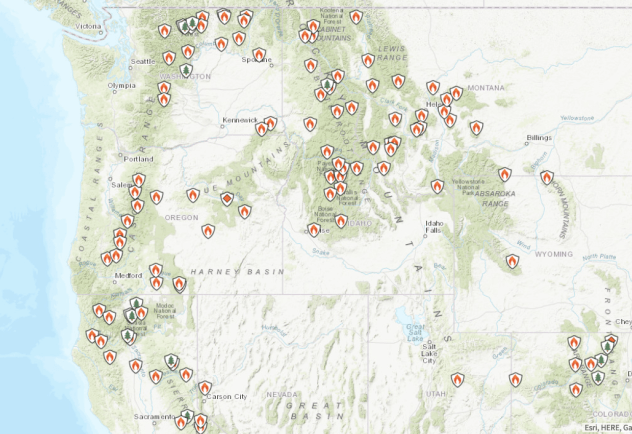 As these fires become less active in the face of all of this rain, that will also help cut down on the amount of smoke that's been in the air recently.

We should continue to see fire conditions improve across the Northwest in the coming weeks as cooler and more damp weather start to become more commonplace.

Meanwhile, farther south, we're heading into the core of offshore wind season across California, which can fuel fast-spreading fires.

Behind this front, there is the potential for some offshore winds into early next week. This will lead to some warming near the coast across Northern and Central California.

The fire risk will be a concern as well as the wind starts to pick up. The strength of this particular event is still not clear yet, but any jump in wind will increase the fire risk.

At this point, it looks like the high-pressure area building southeastward into the northern Rockies early next week will be too far to the northeast to have a major impact across Southern California.