As the Thanksgiving travel period kicks off this weekend and continues through the following weekend, at least three storms of note have the potential to cause trouble on the roads and at the airports across the United States.

More than 55 million travelers have plans to venture at least 50 miles away from home from the Friday before Thanksgiving to the Sunday after Thanksgiving, according to the American Automobile Association (AAA). The holiday travel volume is expected to be second-highest behind 2005 since tracking began in 2000, AAA said. 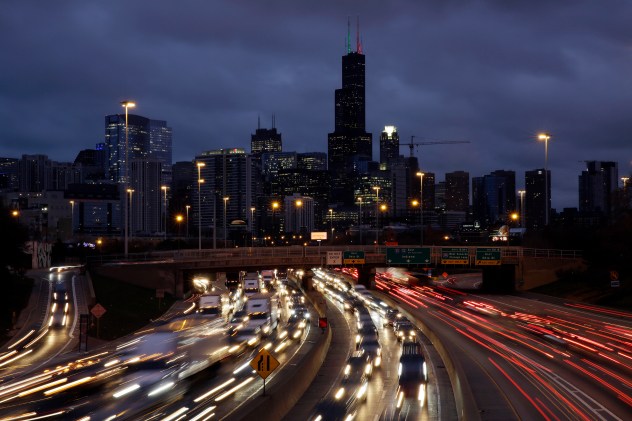 In this Nov. 21, 2018, photo taken with a long exposure, traffic streaks across the John F. Kennedy Expressway at the start of the Thanksgiving holiday weekend in Chicago. The Transportation Security Administration said Wednesday, Nov. 13, 2019, that it expects to screen more than 26.8 million passengers from Nov. 22 through Dec. 2, a 4% increase over the comparable period last year. (AP Photo/Kiichiro Sato, File)

An active storm track is forecast to bring a wintry mix this weekend to the Midwest and Northeast, prior to a more significant and potentially very disruptive storm for the central U.S. during the peak of the Thanksgiving travel time.

The same storm forecast to bring much-needed rainfall to part of California and the Southwest states at midweek and soaking rain to the South Central states late this week is expected to turn toward the Midwest and East this weekend.

Rain and a couple of thunderstorms are likely to extend from the lower Mississippi Valley to the Ohio Valley from Friday to Saturday then from the southern Atlantic coast to the mid-Atlantic and southern New England from Saturday to Sunday. 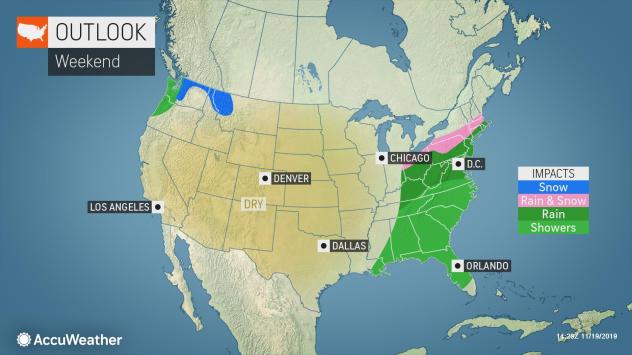 This graphic displays an average of the weather for both days of the weekend. For example, there may be more extensive rain, ice and snow in the Upper Midwest and Northeast during a 12- to 24-hour period this weekend.

While the rain can make for slick travel on the roads, poor visibility due to patchy fog and a low cloud ceiling can lead to airline delays at some of the major hubs from Atlanta to Cincinnati, Pittsburgh, Washington, D.C., Philadelphia and eventually New York City and Boston.

On the storm's colder northwest flank, a wintry mix and some snow could extend from parts of the central Plains Friday night to the middle Mississippi and Ohio valleys Saturday and the Great Lakes and Northeast region during Saturday night.

The next cross-country storm, which will originate over the Gulf of Alaska this weekend, is forecast to dip over the Northwest and northern Rockies early next week.

While this new storm will bring rain showers to the Seattle and Portland areas, snow will spread over the northern Rockies, the mountains of the interior Northwest and the northern Plains from late Sunday to Monday.

Snowfall is likely to occur at to pass elevation levels with this storm, so motorists should anticipate delays as the storm moves in. 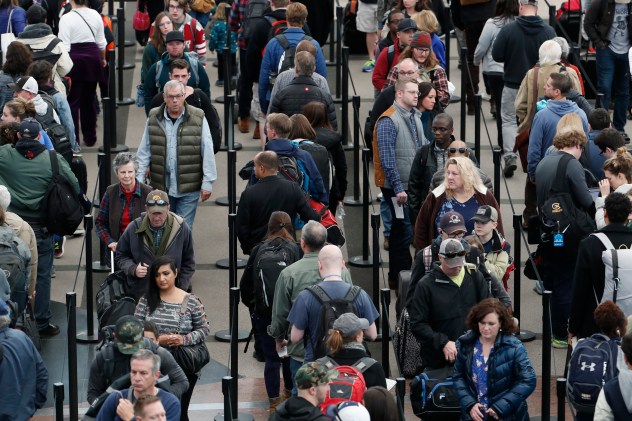 Travelers wait in long lines to pass through a security checkpoint in Denver International Airport Wednesday, Nov. 21, 2018, in Denver. Mild weather in parts of the country and lower gasoline prices have potentially created one of the busiest Thanksgiving Day travel periods since 2005, according to AAA. (AP Photo/David Zalubowski)

In terms of Thanksgiving travel, in lieu of any bad weather, there's "nothing worse than Wednesday," the AAA said in its statement. Trips made on the Wednesday before Thanksgiving can be four times longer as commuters mix with holiday travelers, according to AAA.

That same Northwest storm is likely to regroup over the central and southern Rockies from Tuesday to Wednesday. 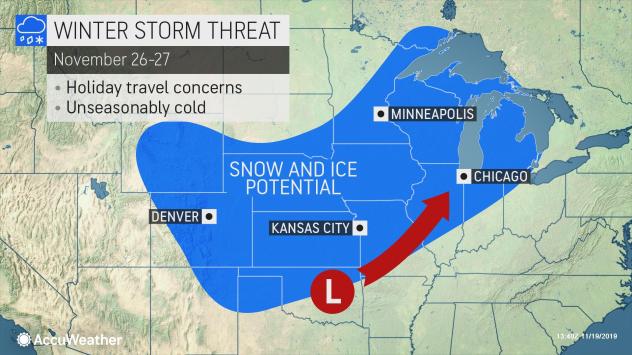 There is the potential for heavy snow and winterlike travel conditions with substantial delays for a 1,200-mile stretch of the heartland. Wintry weather could spread from eastern Colorado and northeastern New Mexico to parts of Wisconsin, Minnesota, and Michigan as Thanksgiving travel surges next Wednesday.

There is the potential for heavy snow and winterlike travel conditions with substantial delays to spread from eastern Colorado and northeastern New Mexico to parts of Wisconsin, Minnesota, and Michigan as Thanksgiving travel surges.

Should the storm develop to its maximum intensity, blizzard conditions may unfold over part of the Upper Midwest with strong winds and low visibility.

Chicago could be in middle of the worst of the storm's wintry side or it may just avoid it. Either way, ripple-effect airline delays may increase as the large and strong storm unfold over the region as many flights connect to or originate from O'Hare International Airport.

"There is a chance the storm turns far enough to the east to allow some snow and/or a freeze-up in parts of Indiana, Ohio and western Pennsylvania late Wednesday and Wednesday night," according to AccuWeather Meteorologist Max Gawryla.

The same storm is likely to produce locally heavy rain and thunderstorms on its warm side over the southern Plains and the lower Mississippi and Tennessee valleys by the middle of next week.

"Depending on how quickly this story system strengthens, we could be contending with severe thunderstorms from Arkansas and Louisiana through southern Indiana and western portions of Kentucky and Tennessee," according to AccuWeather Senior Meteorologist Randy Adkins.

Should the major storm next week move faster, heavy rain, gusty winds and poor visibility could hit travel hard in the Southeast and the Northeast during the day and night before Thanksgiving.

Meanwhile, an intense storm is likely to track more slowly and potentially farther west over the Central states. Such a storm may delay the arrival of rain and colder air on the Atlantic coast and might allow severe thunderstorms to push farther north with warm air into the Ohio Valley and potentially the Great Lakes region.

So, not only may there be normal heavy holiday traffic on the roads and at the airports, a storm may really throw a wrench into plans during the day and night before Thanksgiving over the Central and Eastern states.

Another storm is likely to move in from the Pacific Ocean and could have negative impact on travel with low-elevation coastal rain and mountain and inland snow in the Northwest from Wednesday to Thanksgiving Day.

This far out, the track, strength and timing of each storm can change.

AccuWeather will continue to provide updates for Thanksgiving travel in the coming days. Lightning rips across the sky Podcast: Stormy week in the works for the South