ALERT: Bomb cyclone to bring dangerous and damaging impacts to the West Coast. Get the forecast.
TONIGHT: Best meteor shower of the season peaks. Check viewing conditions forecast for your area.

Periods of heavy rain are expected to linger in some areas, enhancing the flood threat into Friday. Severe thunderstorms could erupt during this time as well.

A wave of torrential rainfall that already soaked portions of the Midwest and Appalachians continued to advance across the Northeast on Thursday, raising the risk of flash flooding. Many areas will face flooding dangers late this week, and rain will fall quickly enough to cause travel problems due to rising water and poor visibility, according to AccuWeather meteorologists, who have been monitoring the situation for days.

Torrential rain prompted the National Weather Service to issue a flash flood warning for several counties in southeastern Pennsylvania, including part of the Philadelphia area, on Thursday.

Heavy rainfall, with the potential for flash flooding, will eye the New England next as the shield of rain pivots eastward into the region Friday. A slow-moving storm and its associated cold front, along with a surge of tropical moisture, are combining forces to create a firehose effect of heavy rain. 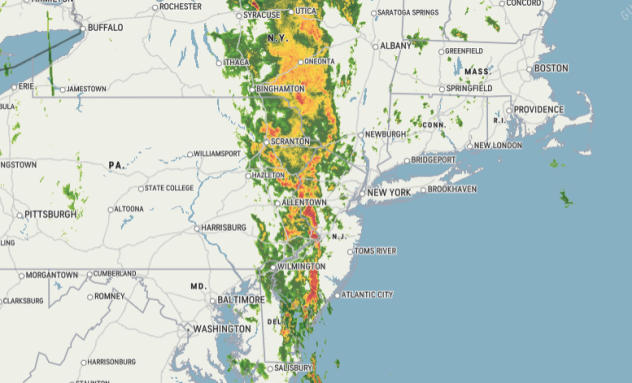 "Ida, as a tropical rainstorm, produced widespread major urban and river flooding a couple of weeks ago, and that is fresh on people's minds, especially from Philadelphia to New York City," AccuWeather Senior Meteorologist Rob Miller said.

In early September, Ida unleashed up to 3.15 inches of rain per hour on New York City, which set new records, overwhelmed the storm drainage system and turned deadly. Even though this system is not associated with a former hurricane and is not capable of producing rain of that intensity, it does contain tropical moisture, and rainfall can approach 1-2 inches per hour in some cases for a few hours.

"Problems from this storm system will not nearly be as significant as Ida, but there will be some issues due to flooding from the already wet ground," Miller said.

A storm total rainfall of 2-4 inches with local amounts to 6 inches is forecast into Friday. An AccuWeather Local StormMax™ of 8 inches can occur. In comparison, Ida unleashed up to 10 inches of rain in parts of the Northeast. 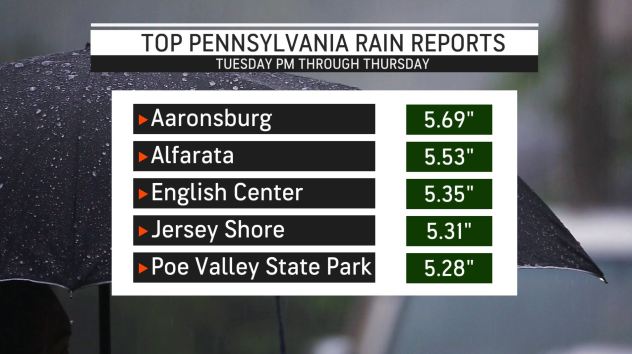 As rain doused the area, at least seven swift-water rescues were reported Thursday morning in Harford County, Maryland, according to officials. An additional motorist in Frederick County had to be rescued from his car when it stalled in several feet of water, CBS Baltimore reported.

In the Jersey Shore region, roughly 5.31 inches of rain fell from Tuesday through Thursday. Aaronsburg in Centre County, Pennsylvania, saw about 5.69 inches of rain within the same timeframe.

Even though the most intense rain from Thursday's storm will have subsided by Friday, drenching rain is forecast to push slowly across New England and raise the risk of localized flash flooding. Since some of the leaves have begun to change and fall in parts of New England, roads can be especially slick with a greater risk of blocked storm drains in some communities. 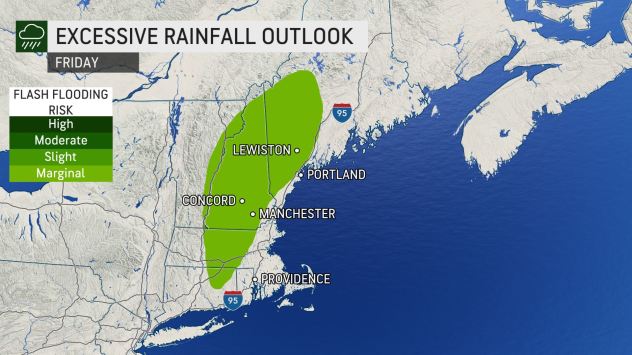 Motorists should anticipate near-zero visibility at times in torrential downpours. Not only can the amount of water on the roads lead to a heightened risk of hydroplaning, but some roads may be blocked by high water. Street and highway flooding can occur anywhere there is poor drainage, such as around underpasses, sunken city highways and along small streams.

AccuWeather forecasters urge motorists to avoid driving on flooded roads as the water may still be rising. Only a foot or two of water can cause vehicles to stall, become stranded and be damaged. In some cases, roads can wash away under floodwaters.

Rivers from the Midwest to the mid-Atlantic and New England will be on the rise and can surge to minor flood stage in some cases. This means that some unprotected areas along streams and rivers can take on water.

Along with the likelihood of flooding, locally severe thunderstorms can erupt and trigger powerful wind gusts. Many instances of strong wind gusts resulted in downed trees, tree limbs and power lines throughout Maryland, Delaware, southeastern Pennsylvania and northern New Jersey.

A few of the strongest storms could spawn a brief tornado, some of which can be obscured by low clouds and heavy rain. Sporadic power outages are likely. Because of the saturated state of the ground, trees may topple over more easily.

Ida triggered more than a dozen tornadoes from eastern Maryland and Delaware to New Jersey and southeastern Massachusetts. While the majority of the dozens of fatalities from Ida in the Northeast were due to extreme flooding, tornadoes killed at least one person and caused several injuries.

During the heaviest rain, and in the vicinity of severe thunderstorms, airline delays are to be expected due to poor visibility, hydroplane risk and dangerous wind shear.

As of 11 p.m. EDT Thursday, Toledo, Ohio, received 4.80 inches of rain from the storm with 4.46 inches drenching Detroit. Multiple roads were closed in the Detroit metro area on Wednesday due to high water. Rain was still falling on portions of Michigan, Ohio and Indiana on Thursday, but it was not coming down at the same pace as Wednesday's deluge.

Flood warnings were in effect for multiple rivers in southeastern Michigan during Wednesday night and Thursday. The Rouge River in Detroit crested at 17.8 feet or 2.8 feet above flood stage early Thursday morning, but the Huron River at Hamburg, Michigan, is forecast to crest near major flood stage at 7.5 feet on Monday. At this level, homes along the river and at Ore Lake become surrounded by water. 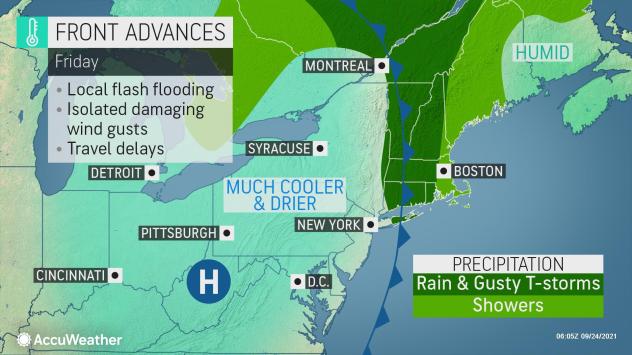 Dry weather will return to the Midwest and Appalachians later Thursday and advance through the mid-Atlantic on Friday and finally reach New England Friday night. Along with the drier air, conditions will turn much cooler for the first full weekend of fall.

The cooler air will set the stage from some of the lowest nighttime temperatures since this past June and even May in some cases with lows in the mid-40s forecast to be common in the Appalachians. Temperatures are forecast to dip into the 50s in the major cities along the Interstate 95 corridor this weekend to make for a true fall feel.

Sam, a Category 1 storm, forecast to rapidly intensify into next major hurricane