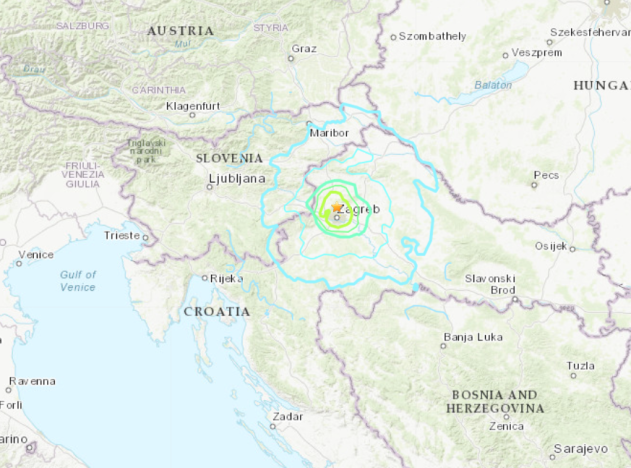 The star marks the epicenter of a strong earthquake that rattled Croatia on Sunday morning, local time. (USGS)

A strong earthquake rattled Zagreb on Sunday morning, local time, killing at least one person and littering the streets with debris.

There has been at least one strong aftershock thus far with a magnitude of 4.6.

A teenage boy has reportedly died after a roof collapse in Zagreb.

"We received a report of the collapse of the building at Djordjiceva 13. An ambulance team took to the field and found a seriously injured child who showed no signs of life," said Zarko Rasic, director of the Zagreb Institute of Emergency Medicine, via a local news outlet. The boy's death was confirmed at a nearby hospital.

People across the capital shared images on Twitter of debris from damaged buildings littering the streets, including the Croatian Parliament building. Vehicles were also seen nearly completely crumpled.

The historic Zagreb Cathedral also suffered damage, with the top of one of the spires being broken off. The cathedral was severely damaged in 1880 when a significant earthquake shook the city.

“It felt like a train was coming through my apartment, in all my time in the city I have never felt anything like that before,” a resident told The Dubrovnik Times.

Electricity has been cut in parts of the capital, the news agency reported.

All occupants at Zagreb's airport were evacuated from the building after the earthquake. No infrastructure or runway damage was found and the airport is now operating on a normal schedule.

Prior to the earthquake, a lockdown was put in place in Zagreb and elsewhere across Croatia to combat the spread of coronavirus.

"Now everyone’s outside grouped in front of their buildings. This won’t help," wrote one person on Twitter after the earthquake struck.

"This was the strongest earthquake in Zagreb in the last 140 years, but there is no need to panic and go to gas stations in large numbers," government officials stated on Twitter. "Regardless of the situation, we emphasize once again the importance of keeping a distance and following the instructions to combat #COVID ー 19!"

By Sunday afternoon, local time, the Office of Emergency Management announced that they would provide meals and shelter for residents who cannot return to their homes.

It was also announced that no major damage has been reported to the hospitals in Zagreb.

Snow showers arrived in the city late in the day on Monday as cleanup and recovery efforts continued. Rain and snow showers are expected to continue into the middle of the week as chilly conditions linger over the area.

Can ants, squirrels and other animals sense when an earthquake is coming?
Increased UV exposure may limit spread of new coronavirus
Daily coronavirus briefing: Global confirmed cases surge past 300,000
Report a Typo
Comments that don't add to the conversation may be automatically or manually removed by Facebook or AccuWeather. Profanity, personal attacks, and spam will not be tolerated.
Comments
Hide Comments