The streets of Mumbai, India, were underwater as heavy rain triggered flash flooding on July 3.

Another storm is set to cross central South America, bringing yet another round of heavy rain and damaging wind to the region that is still recovering from similar conditions a week ago.

By Tuesday morning, this next round of rain overspread parts of Paraguay, northeast Argentina and extreme southern Brazil.

Areas of heavy rain will be common across this area into Tuesday night as the system pushes east toward the Atlantic Ocean. During this time rain is expected to spill over into Uruguay. 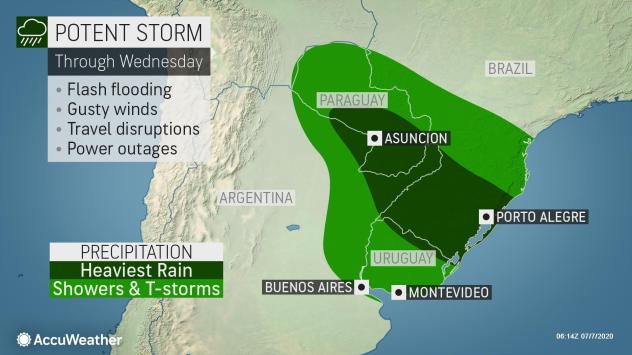 Periods of rain will linger across the region on Wednesday as the storm begins to move away.

Rainfall totals of 25-50 mm (1-2 inches) will be common across northeast Argentina, Paraguay, Uruguay and southern Brazil into the middle of the week. In areas of heaviest rain, totals can climb to 50-100 mm (2-4 inches).

An AccuWeather Local StormMax™ of 150 mm (6 inches) will be possible in areas that receive persistent downpours into Wednesday.

While flash flooding will be a concern across the region through the beginning of the week, this storm will also threaten central South America with gusty winds.

Wind gusts of 80-105 km/h (50-65 mph) can be measured across the region, especially Tuesday night and Wednesday as the storm system nears the coast. Gusts of this speed can lead to localized damage.

Any wind gust may also be able to knock over trees and power lines due to the saturated soil from the rounds of wet weather in recent days, leading to power outages across the region.

Many across the area forecast to be impacted by this early week storm are still recovering from last week's vigorous storm.

On June 29, a storm system developed over central South America and brought periods of heavy rain and damaging winds to parts of southern Brazil into July 1.

The storm is being considered the "worst wind disaster in Santa Catarina's history," according to the state's Civil Defense. As of Saturday, 10 deaths are being blamed on the storm.

One hundred and eighty-four municipalities were affected across Santa Catarina, according to Globo. In the city of Governador Celso Ramos about 80 percent of the builds sustained damage from the strong winds.

Ongoing recovery efforts can be hampered in the coming days as heavy rain and damaging winds are forecast to return to Santa Catarina this week.