AccuWeather meteorologists say that the threat of flooding that began in the Northeast on Sunday could be compounded by the potential for severe thunderstorms that are forecast to track through the heavily populated region into Tuesday.

The same storm that brought torrential rainfall to Chicago, which flooded basements and turned Soldier Field into a swamp, began bringing rounds of rain to the Northeast on Sunday.

On Sunday, the storm system unloaded 1.64 inches of rain in Salisbury, Maryland, located near the Delaware border, with rainfall amounts around an inch elsewhere in eastern Maryland and Delaware. Heavy rain also persisted from the western Philadelphia suburbs to north-central New Jersey.

On Monday, roughly a dozen severe weather reports were received by the Storm Prediction Center from the mid-Atlantic, stretching from North Carolina to Pennsylvania. While storms reaching severe status remained somewhat isolated, other hazards, such as lightning, were more common. This was the case in central Pennsylvania Monday night when a line of thunderstorms slid through the State College area. Heavy rain also deluged communities from Charlottesville, Virginia, to New Haven, Connecticut.

Even into Tuesday morning, flooding and heavy rain remained an issue in the Northeast. Flash flood warnings were issued early in the morning for much of New York City, as well as some nearby New Jersey suburbs. Over 2 inches of rain quickly fell across the region, leading to the high threat of flooding in the city. 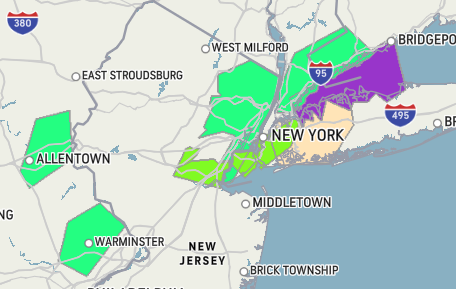 As wet weather continues into New England through Tuesday evening, once again some localized areas could receive as much as 2 inches of rain, especially if any area gets more than one heavy thunderstorm.

AccuWeather forecasters say heavy rain could bring a rise to creeks and streams, making low-lying areas most susceptible to flooding.

With more dire drought conditions across southern New England, according to the U.S. Drought Monitor, flooding concerns will be highest in that area as heavy downpours push into the region. When more extreme drought grips a region for a lengthy time, the ground gets so dry that it's unable to absorb a lot of water quickly. As such, the rainwater in a heavier downpour would run off the ground and pool in low-lying areas, creating flooding.

The influx of rainfall is not only expected to bring flooding rain, but also increase the risk for severe weather across the region.

In addition to the heavy rain, cities from Hartford, Connecticut, to Burlington, Vermont, and Boston could all be threatened by damaging winds and perhaps an isolated tornado. 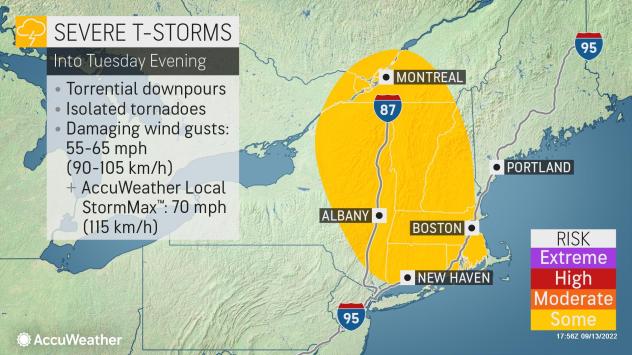 Thunderstorms will have the potential in the afternoon and evening to bring damaging wind gusts of 55-65 mph, with an AccuWeather Local StormMax™ of 70 mph possible. An isolated tornado or two is possible as well.

Behind the volatile weather, showers are likely to linger across northern New England on Wednesday. The remainder of the Northeast will turn much drier. An area of high pressure is expected to move into the mid-Atlantic, allowing for normal mid-September temperatures across much of the East.