After you’ve settled back at home and done all your shopping, you can spend a little more by donating to the Red Cross (or any disaster relief group) on Giving Tuesday!

A record-breaking 2020 Atlantic basin hurricane season was so intense and spawned storms so frequently that all 21 names on the preset list were used up and several letters from the Greek alphabet had to be used to name storms. The combined economic toll the record-breaking number of storms left was north of $60 billion, and people in several hard-hit places are still recovering and could be doing so for years to come.

In innumerable ways, the 2020 hurricane season left its mark from the northeastern United States down to Central America, with heavy hits throughout the East Coast and the frequent barrage of storms making landfall in Louisiana. For some, the storms dealt a brutal blow by striking their lifelong hometowns and destroying years of memories.

Tied in with the emotional devastation is the estimated financial ruin these storms cause. Such estimates are helpful not only for gaining a better understanding of the season's totality but also for better understanding the vast amount of support many of the impacted areas will need to get back on their feet.

"AccuWeather estimates the total damage and economic loss caused by U.S. landfalling named storms in 2020 to be between $60 billion to $65 billion,” said AccuWeather Founder and CEO Dr. Joel N. Myers, who has been studying the economic impact of tropical weather for decades. "AccuWeather’s estimate includes all losses and financial impact to the economy, which are greater than insured losses."

This year, 12 named storms have made landfall in the continental U.S., breaking the record of nine that had stood since 1916.

Myers' expert analysis, made by incorporating independent methods to evaluate all direct and indirect impacts of the storms, helps better paint a picture of the U.S. financial ramifications from such a noteworthy season.

According to Myers, the AccuWeather estimate points to Hurricane Laura from August as the most financially disastrous storm of the year, which inflicted an estimated $25 billion to $30 billion in damages. Hurricane Sally, Hurricane Delta, Hurricane Zeta, Hurricane Isaias, and Tropical Storm Beta were other storms that also caused at least $1 billion of estimated damage. 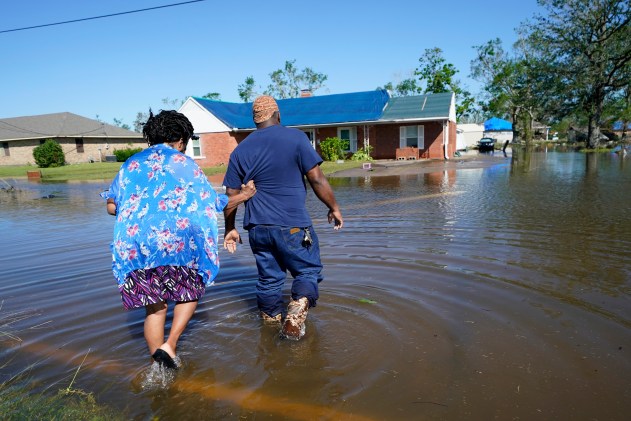 Soncia King holds onto her husband Patrick King in Lake Charles, La., Saturday, Oct. 10, 2020, as they walk through the flooded street to their home, after Hurricane Delta moved through a day earlier. (AP Photo/Gerald Herbert)

Damage from a storm also goes far beyond the immediate impacts, and Myers pointed to a wide variety of factors that AccuWeather uses to calculate damage estimates.

Along with the direct structural blows to homes and businesses, the estimates include those buildings' contents along with damaged or destroyed vehicles, job and wage losses, business losses and bankruptcies, agricultural and crop losses, damage from storm surge to coastal areas, contamination of drinking water, infrastructure damage, municipal and state costs, federal assistance, cleanup costs and health costs, including the cost of long-term, lingering health effects. 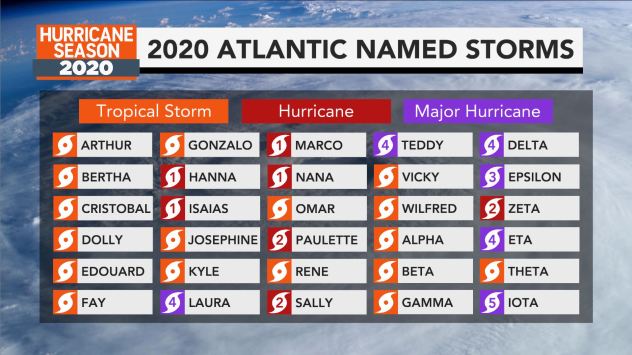 Those economic factors, combined with weather considerations such as storm surge, flooding potential and wind strength, help to determine the AccuWeather RealImpact™ Scale for Hurricanes, a more nuanced rating method the company introduced in early 2019 for assessing the overall disaster potential for a given storm.

“Tropical Storm Beta is a great example of the value of the AccuWeather RealImpact™ Scale for Hurricanes that we invented,” Myers said. “It would be easy to dismiss Beta since it was not a hurricane, but a tropical storm that did not register on the Saffir-Simpson scale. In this case, however, the flooding rain, and not the wind, especially due to heavy rains coming on the heels of other storms that had already saturated the area causing further significant flooding, was the main source of the damage.” 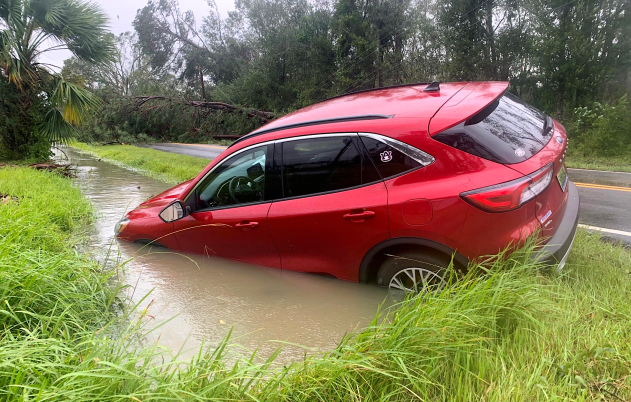 A car was seen stranded in a flooded ditch on the side of a road in Foley, Alabama, after Hurricane Sally stormed through on Wednesday, Sept. 16, 2020. (AccuWeather / Bill Wadell)

On Giving Tuesday, which this year occurs the day after the official end of the 2020 Atlantic hurricane season, that astronomical estimate also highlights how many people are in need, particularly in a year when many were already struggling from impacts of the coronavirus pandemic. Organizations aiding the storm-impacted communities often rely on donations that come from support initiatives like Giving Tuesday.

In this season, both on and after Giving Tuesday, it's crucial for capable residents to financially support organizations directly addressing those stricken areas. Helpful resources such as Charity Navigator and CharityWatch are useful for finding highly-rated charities able and ready to assist with the help of your donations. And donations can be made to the American Red Cross by clicking here.