The Gulf Coast is bracing for yet another landfall as Zeta gets closer to shore.

With just a little more than a month to go until the Atlantic hurricane season ends, New Orleans was bracing for what stands to be its first major impact this year from a landfalling hurricane.

Zeta exploded into a Category 2 storm packing 110-mph winds -- just 1 mph shy of major hurricane force -- as it bore down on the Gulf Coast. By late afternoon, the hurricane's center was located just a few miles south-southwest of New Orleans, where a hurricane warning was in effect. The storm had been consistently gathering forward speed during the overnight hours and early on Wednesday, and, as of 4 p.m. CDT, was racing northward at 24 mph, with landfall predicted in late afternoon local time near Houma, Louisiana, a small city about 50 miles southwest of New Orleans.

Forecasters on Wednesday rated Zeta a 2 on the AccuWeather RealImpact™ Scale at the time of landfall, increasing it from its initial 1 rating. The company’s hurricane scale takes into account a broad range of impacts, rather than just wind speed used in the Saffir-Simpson scale to assess the overall impact of a tropical system.

Zeta is the fifth named storm to hit the Louisiana coast during what has been a relentless hurricane season, and the 11th to strike the country as a whole – a national record. City officials in New Orleans called for residents who live outside the levee system to evacuate voluntarily as AccuWeather’s futurecast shows that Zeta’s eyewall could move right over the Big Easy. 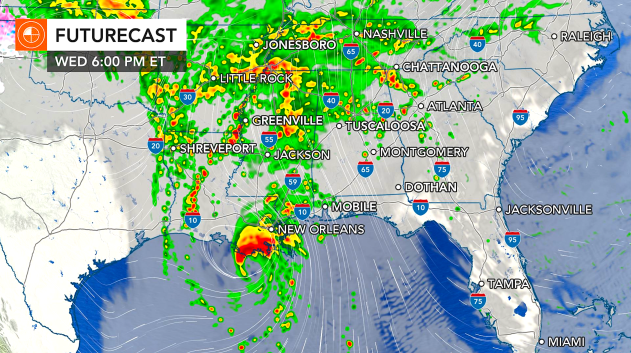 Impacts along the coast were beginning to occur late Wednesday morning, even when the storm was more than 200 miles away. AccuWeather National Reporter Jonathan Petramala was stationed in Grand Isle, Louisiana, a barrier island about 100 miles south of New Orleans, and storm surge was already encroaching onto land. Conditions continued to deteriorate as the storm barreled toward the coast.

In addition to New Orleans, hurricane warnings were in effect along the Gulf Coast from central Louisiana eastward to the Mississippi-Alabama border and tropical storm watches have been issued northward through Atlanta. 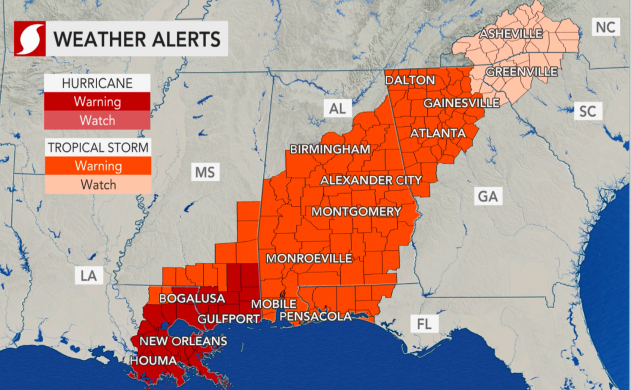 "We anticipate a slight loss of wind intensity shortly before landfall, but we still expect Zeta to be a Category 2 hurricane at the time of landfall late Wednesday afternoon," AccuWeather Senior Meteorologist Adam Douty said.

Dangerous and damaging storm surge, high winds and flooding rainfall will hammer the area from southeastern Louisiana to the Florida Panhandle as Zeta makes landfall late Wednesday afternoon and begins to move inland. Several tornadoes could also touch down as the Zeta batters the U.S. Gulf Coast, especially near and east of where the storm comes onshore. 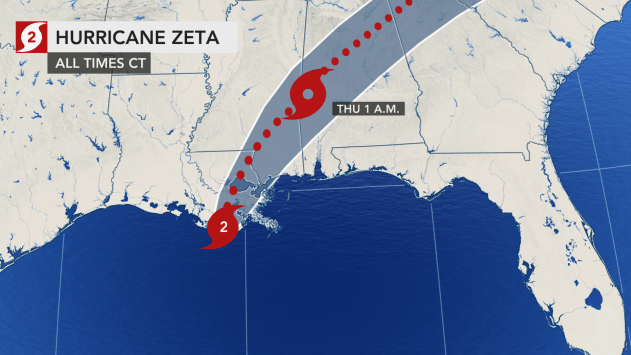 The storm’s projected path has the potential to bring the most significant impacts in southeastern Louisiana and the New Orleans area of any tropical system this season as the city managed to avoid the core of all tropical systems thus far this year. The Big Easy is at risk for power outages, flooding and property damage from Zeta — and conditions will deteriorate quickly there late Wednesday afternoon and early Wednesday evening. 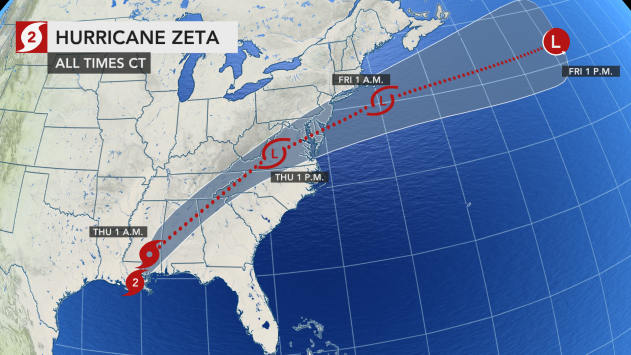 Storm surge warnings have been issued from the mouth of the Atchafalaya River in Louisiana to Navarre, Florida. This includes the bays around Gulfport, Mississippi, and Mobile, Alabama.

As Zeta moves over the northern Gulf, it is expected to continue to pick up forward speed and move along at a breakneck pace of 25 mph as it reaches the Louisiana coastline. The storm’s fast movement will likely lead to a fast rise in coastal waters —much faster than what would be expected by a system moving at a more typical speed of 10 mph. 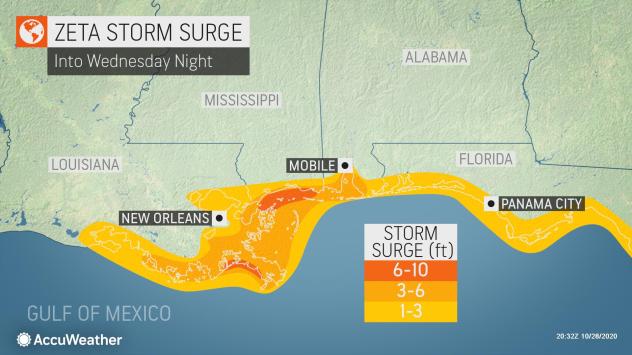 The fast forward speed can result in the storm retaining wind energy well inland and downed trees and power outages can occur hundreds of miles inland of the coast. 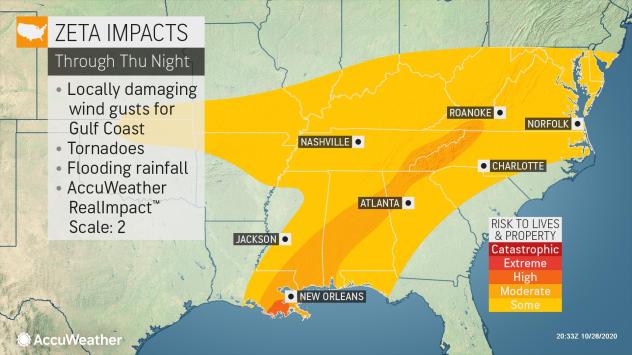 "Power outages could last for a few days to a week in some areas and minor structural damage is expected as well, especially to weak and poorly built buildings," Douty said.

Sporadic tree damage and power outages can occur with wind gusts of 40-60 mph as far to the north as the Piedmont areas of the interior South and perhaps to the mid-Atlantic coast. Major cities well inland, such as Montgomery, Alabama; Atlanta; Greenville, South Carolina, and Charlotte, North Carolina, could experience power outages and travel problems due to fallen trees and urban flooding. 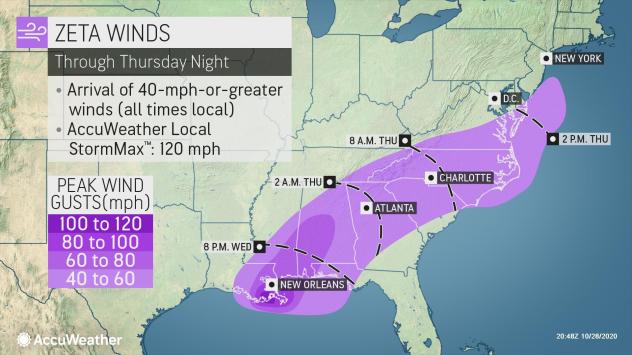 The central and eastern Gulf coast will bear the brunt of the tropical system's impacts, but effects will also reach far inland across the U.S.

Enough rain to cause flash and urban flooding is forecast as far to the north as the Ohio Valley, central and southern Appalachians and the mid-Atlantic coast. Torrential rainfall will be limited to several hours due to the fast forward motion of Zeta, but downpours and moderate rainfall will precede the storm many hours in advance. 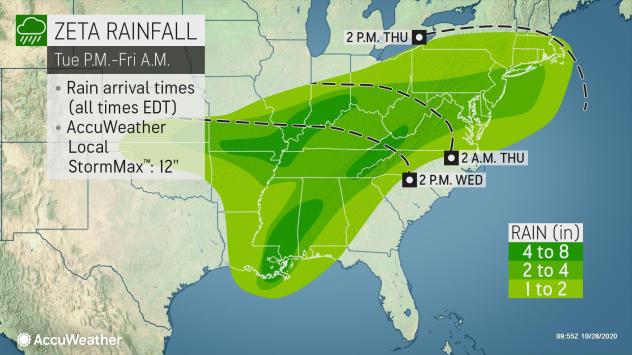 "Heavy rain is by far going to be the most widespread impact from Zeta in the United States," warned AccuWeather Meteorologist Niki LoBiondo.

Rainfall on the order of 4-8 inches will occur along the path of Zeta as it interacts with a non-tropical storm, the same one bringing heavy snow and ice to the southern Plains and Rockies. An AccuWeather Local StormMax™ of 12 inches is forecast from southeastern Louisiana to part of western Alabama, which will be closest to the source of tropical moisture from the Gulf of Mexico. 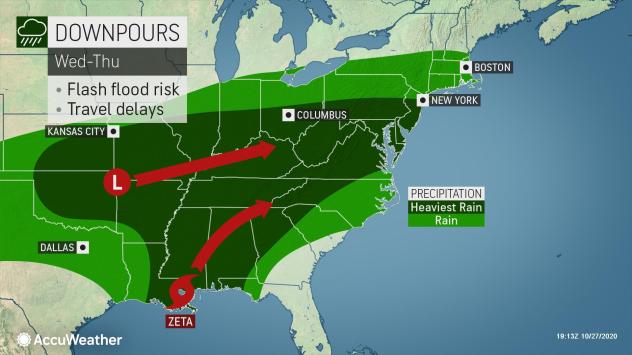 "Flash flooding will be a threat across much of the area where the heaviest rain totals are expected, especially in places with steeper terrain," according to AccuWeather Meteorologist Jake Sojda. "Ponding on roads and in poor drainage areas will likely be widespread, especially in communities where falling leaves clog storm drains."

Due to the widespread nature of heavy rain over the lower Mississippi and Ohio valleys, as well as the southern Appalachians, small stream flooding is expected and some minor river flooding may also develop along the tributaries of the major rivers by the end of the week.

Zeta's legacy may include tornado outbreak

Sometimes, when tropical storms or hurricanes make landfall, tornadoes and waterspouts can occur, and that will be a threat when Zeta comes ashore on the Gulf Coast.

"Tornadoes to the east of Zeta’s track can lead to localized areas of more intense damage," Douty said. "There is the concern that there could be a higher-than-usual number of tornadoes with this tropical system as extra energy from the non-tropical storm system over the southern Plains interacts with Zeta as it moves inland." 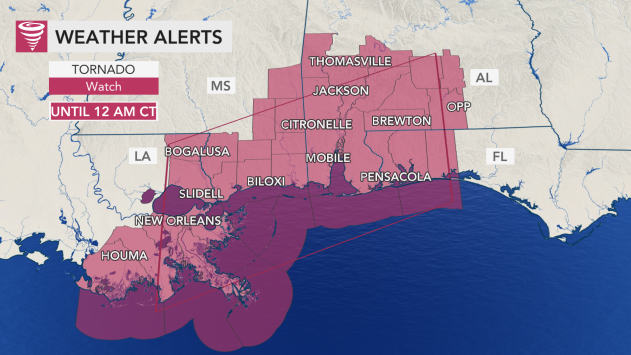 In the wake of Zeta, showers and thunderstorms will be left behind in the area from the western Caribbean to the southern Gulf of Mexico and the Florida Straits. "This area will have to be watched for the next potential tropical development zone next week," according to AccuWeather Senior Meteorologist Dave Houk.

'We’re doing everything we can to prepare for this storm'

Even though Zeta is expected to strike the U.S coast as a Category 1 hurricane, forecasters and officials have been warning residents along the central and eastern Gulf Coast not to let their guard down.

Louisiana Gov. John Bel Edwards declared a state of emergency on Monday ahead of Zeta’s arrival. “[The] good thing and the bad thing is we’ve had a lot of practice” at weathering storms this season, Edwards said during a Monday afternoon update on the looming threat for his state. “We’re doing everything we can to prepare for this storm,” he added.

Nearly 3,600 people remain sheltered by the state after devastating back-to-back hurricane strikes. Laura struck the state as a devastating Category 4 storm in late August, and then just 43 days later, Category 2 Hurricane Delta made landfall only 13 miles to the east of where Laura hit. 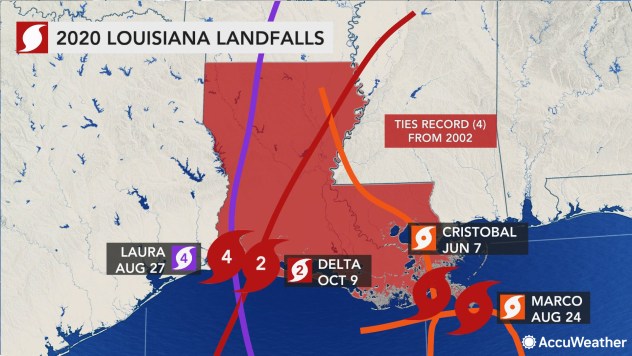 Edwards also noted that his state is dealing with dueling disasters amid the public health emergency of the pandemic. "We may be tired of COVID-19 and hurricanes, but neither the virus nor Mother Nature is going to take that into account," Edwards said.

The National Guard was mobilized and ready to respond to Zeta in 16 parishes of Louisiana. Alabama Gov. Kay Ivey and Mississippi Gov. Tate Reeves both issued emergency declarations in advance of the hurricane’s effects.

Zeta made its first landfall as a Category 1 hurricane, packing 80-mph winds, along the coast of the Yucatan Peninsula of Mexico just north of Tulum shortly after 11 p.m. CDT Monday. The storm lost some wind intensity once over land and weakened into a tropical storm as it spun northward unleashing storm surge, heavy rain and strong winds Monday night.

It will become the eighth named storm to strike the Gulf Coast this season, and the 11th tropical system to make landfall in the U.S. in 2020. Hurricane Delta was number 10, which broke the record of nine storms to crash into the continental U.S. in one season, previously set in 1916.

Zeta is projected to be the sixth landfalling hurricane in the continental U.S. this season, which will tie another national record previously set in 1886 and 1985. Hanna, Isaias, Laura, Sally and Delta are the other hurricanes that hit U.S. soil in 2020.

Also notable is the calendar date that Zeta will impact the U.S. It’s expected to be the latest hurricane landfall in the calendar year since Kate hit Mexico Beach, Florida, in 1985.

"For those counting, 2005 still holds the record for the most number of named storms in a season (28). NHC identified an 'unnamed' subtropical storm in its post-season analysis that year, which is included in the total," the National Hurricane Center said on Twitter. "With #Zeta, the number for 2020 currently stands at 27." 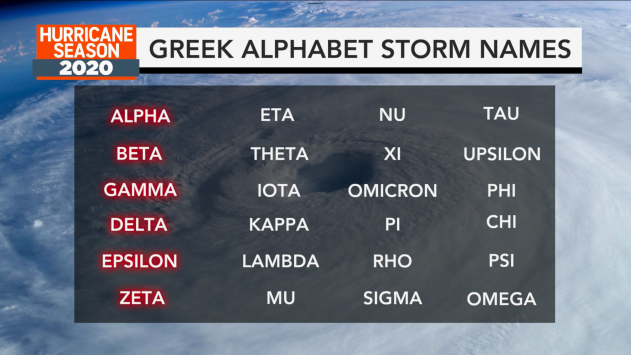