Influenza A cases are on the rise across the nation. AccuWeather’s Bill Wadell looks at the measures one teacher is taking to protect her students and her own kids.

A chart of the 2019-20 flu season from the Centers for Disease Control and Prevention (CDC) shows a red arrow rising like a stomach-churningly steep roller coaster on its way to the top. It shows the flu activity level for the start of this historically bad flu season – but when will it crest?

Perhaps soon, but there may be more trouble after that.

“We forecast moderate to high levels of active transmission of influenza to continue for most U.S. states for the next couple of weeks,” according to a report from researchers at the Biocomplexity Institute at the University of Virginia who work in a research partnership with AccuWeather.

“We expect initial peaks to be reached in many states in the next couple of weeks; however second peaks of activity remain expected.”

The percentage of visits for influenzalike illnesses (ILI) rose for the third straight week, according to the CDC. Nationwide, 6.9 percent of patients reported through the U.S. Outpatient ILI Surveillance Network were due to ILI.

This percentage is substantially above the national baseline of 2.4 percent. It’s the eighth straight week flu activity is above baseline normal; last year, levels of ILI in the United States were at or above baseline for 21 straight weeks, the longest above-baseline flu season since the CDC started keeping such comparable records in 2007-08. 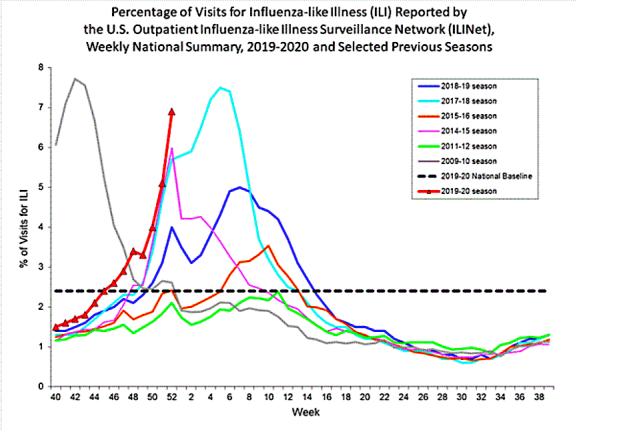 Influenza B remains the dominant virus, but Biocomplexity Institute researchers expect Influenza A to continue to grow and overtake B as a second wave and possibly second peaks of activity in the coming months. Influenza B still causes significant illness in those stricken; however, hospitalization and death are less frequent than with Influenza A.

The CDC estimates that so far this season there have been at least 6.4 million flu illnesses, 55,000 hospitalizations and 2,900 deaths from the flu.

One state particularly stands out so far this season.

“Louisiana has been a harbinger of things to come for other states this flu season,” the Biocomplexity Institute report notes. The state experienced high Influenza B activity earlier than other states and now, after several weeks of declining activity levels, Louisiana has reported a surge in activity driven by Influenza A.

Flu season typically begins in October, peaks between December and February and lasts well into March although activity can last as late as May.

Download the free AccuWeather app to see the forecast for your location. Keep checking back for updates on AccuWeather.com and stay tuned to the AccuWeather Network on DIRECTV, Frontier and Verizon Fios.

Some relief on the way for parched Southern Calif.

Gulf Stream at its weakest in 1,000 years, study says Up to 30 inches of snow buries South Korea, Japan March comes in like a lion with snow squalls in the Northeas... Meteorological spring is here. Here's what to expect Is there love for 40-degree days?

Podcast: A blast of Arctic air