A microscopic, single-celled amoeba that can destroy the brain of its victims has reared its ugly head in Florida.

The Florida Department of Health (DOH) confirmed that one person was infected by a brain-eating amoeba in the Tampa area, just before the Fourth of July holiday weekend. The unidentified individual contracted naegleria fowleri, which is a single-cell amoeba that can produce a rare but often fatal infection called primary amebic meningoencephalitis (PAM), according to the department.

The DOH reported on July 3 that the case was in Hillsborough County but did not outline exactly where the infection was contracted or the patient's current condition.

In an interview with AccuWeather, Dr. David Kaufman, professor and chair at the Michigan State University College of Osteopathic Medicine in the Department of Neurology and Ophthalmology, revealed what it's like to contract this brain infection and the physical impacts it leaves behind if one lives.

Only four people out of the 145 known infected individuals in the United States from 1962 to 2018 have survived, according to the Centers for Disease Control.

Cyst of naegleria fowleri in culture. (Image via the Center for Disease Control)

“A brain infection due to this amoeba (Naegleria fowleri) is quite rare. It invades the brain usually by nasal absorption of warm to hotter lake or occasionally poorly chlorinated swimming pool water that is contaminated,” Kaufman said.

There have been 37 cases of naegleria fowleri in Florida since 1962, according to the Department of Health. But between 2009 and 2018, only 34 infections were reported in the entire United States. Of those cases, 30 people were infected when spending time in recreational bodies of water, three were infected after performing nasal irrigation with contaminated tap water, and another person was infected by contaminated tap water used on a backyard slip-n-slide, the CDC said.

While infection rates are low, the DOH issued a warning to residents of Hillsborough County on late last week, given the potentially deadly consequences of infection.

Health officials urged locals to avoid nasal contact with water from taps and other sources, including bodies of open water such as lakes, rivers, ponds and canals. Those locations are where infections are more likely in the warmer summer months of July, August and September.

The amoeba enters through the nasal passages, and according to Kaufman, it can invade the brain through infection of the olfactory nerve, which is the nerve that provides the sense of smell. It can also enter the brain by invasion through the bones that make up the facial sinuses. The amoeba cannot be passed from person to person.

“Symptoms can emerge within 24 hours although it may take a few days for issues to emerge,” Kaufman said.

Significant headache associated with stiff neck and fever can be early signs, Kaufman reports. The development of a seizure, face, arm or leg weakness or loss of speech can all be symptoms as well. 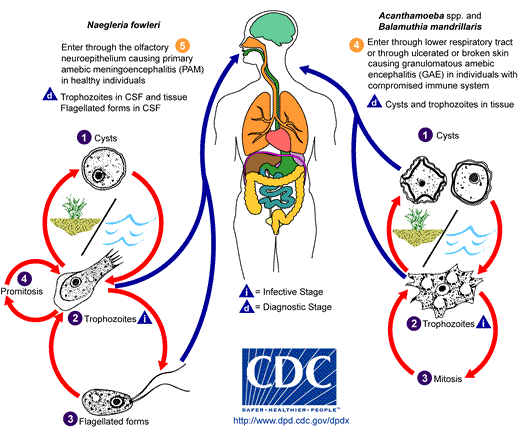 As with anything, Kaufman said the sooner treatment occurs the better.

The neurological residual from this sort of infection can vary greatly from very minor issues such as periodic mild headache to extreme issues such as uncontrollable seizures, paralysis, blindness, a chronic vegetative state or a continual coma, according to Kaufman.

Kaufman stresses it is an extremely rare infectious disease, especially in cooler lake waters in northern locations like Michigan.

“In areas such as hot springs or certain lakes in places like Florida, it is also quite rare but can occur. For prevention, logical preventative measures could include avoiding exposure of water to the nasal passages,”  Kaufman said.

The CDC says naegleria fowleri is a "heat-loving organism" and thrives best at temperatures up to 115 degrees Fahrenheit. 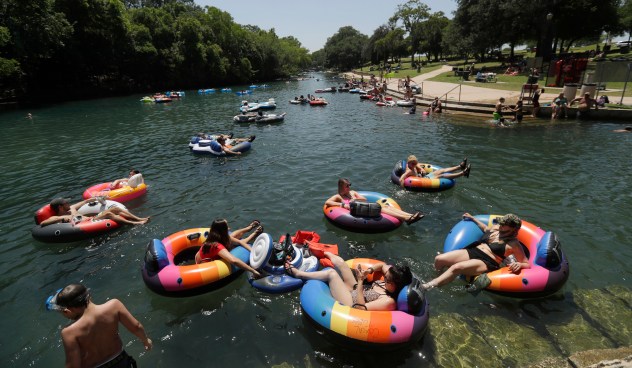 Anyone who has symptoms should seek medical attention immediately, especially if the onset of symptoms comes after swimming in warm freshwater.

“If after swimming in a warm to hot lake, or even if you have not done this, if there is a significant unrelenting, very painful headache especially associated with a stiff neck or fever or if a new neurological issue develops such as a newly developed seizure disorder, arm, face or leg weakness or loss of speech, consider rapid access to an emergency room,”  Kaufman said.

These complaints can be due to any progressive neurological issue in addition to a brain infection, according to Kaufman.

The DOH has urged people who experience those symptoms to "seek medical attention right away, as the disease progresses rapidly".

According to CBS News, the four people known to have survived an infection caught it at its earliest stages.

"Remember, this disease is rare and effective prevention strategies can allow for a safe and relaxing summer swim season," the DOH said.