Is the US ready for how the coronavirus may impact the next flu season?

Researchers with Oxford University have developed a COVID-19 test that takes just 30 minutes to determine if a patient has the virus, and it could be available for use soon.

As the world deals with the unrelenting daily spread of the novel coronavirus, the World Health Organization (WHO), among its many other initiatives at this time, also looked farther down the road. At the end of February, the WHO announced its recommended composition of influenza virus vaccines for use in the U.S. and the Northern Hemisphere in 2020-21.

The timing was critical.

“It takes at least six months to produce large quantities of vaccine,” according to the Centers for Disease Control and Prevention (CDC). The Food and Drug Administration makes the final decision about which influenza vaccines can be sold in the U.S.

Demand for the flu vaccine is expected to be high in the U.S. this fall as a result of COVID-19 concerns and for preventive health measures. U.S. confirmed cases of COVID-19 increased 94 percent in only four days, climbing from roughly 93,000 on March 27 to more than 181,000 as of Tuesday, March 31.

A record 169.1 million doses of flu vaccines were administered in 2018-19, with this year’s total not yet finalized but expected to be even higher. A record again figures to be set for the 2020-21 flu season.

“We are planning to increase our total production of flu vaccine doses by 8 percent in 2020 compared to 2019 for both Southern and Northern Hemisphere campaigns,” a spokesperson for Sanofi replied to AccuWeather in an email. Sanofi is one of the manufacturers of flu vaccines.

“This represents a significant increase of 29 percent over two years (2020 vs 2018),” the spokesperson added. “Nevertheless, we anticipate the demand in the Northern Hemisphere to grow at an even higher pace and we’re working on an internal allocation process, in order to meet the demand in an optimal way.” 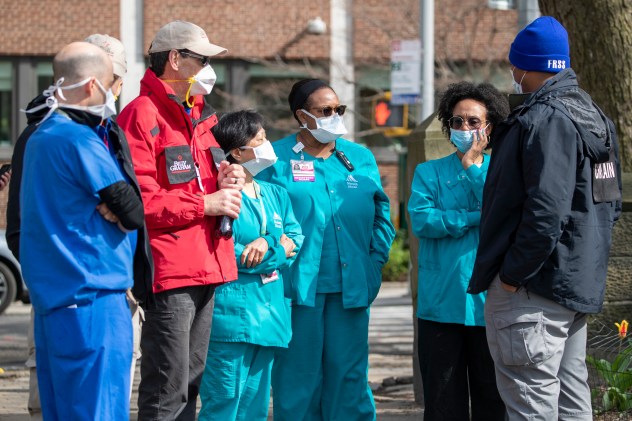 Medical personnel talk to chaplains, left, as they tour the Samaritan's Purse 68-bed emergency field hospital especially equipped with a respiratory unit in New York's Central Park, Tuesday, March 31, 2020, in New York. The new coronavirus causes mild or moderate symptoms for most people, but for some, especially older adults and people with existing health problems, it can cause more severe illness or death. (AP Photo/Mary Altaffer)

Influenza is the most frequent cause of death from a vaccine-preventable disease in the U.S. Flu season typically begins in October, peaks between December and February and lasts well into March, although activity can last as late as May. Flu viruses are more stable in cold air and the low humidity allows the virus particles to remain in the air, according to Peter Palese, who was the lead author on a key flu study in 2007.

A total of 49.2 percent of the U.S. population received the flu vaccine in 2018-19. “The goal was to get to 70 percent by this year, but no states have gotten there yet,” Dr. Bryan Lewis, a professor at the Biocomplexity Institute at the University of Virginia, told AccuWeather.

So what’s ahead regarding the public’s reaction to wanting the flu vaccine this fall?

“I remember during the 2009 pandemic when the flu vaccine came out, they couldn’t keep enough of it,” Dr. Deborah Levy, chair and professor of the Department of Epidemiology at the University of Nebraska Medical Center College of Public Health, told AccuWeather.

“If it happened then – and the coronavirus is worse now – I would suspect that you’re going to have a high demand for it,” said Levy, who worked at the CDC for 20 years from 1996 to 2016 and was involved with crises involving SARS, MERS and the Zika virus, among others. “And depending on how high the demand is, they may need to figure out how to roll it out. Everybody wants it right away, but it doesn’t work that way.”

The U.S. and other areas of the Northern Hemisphere may get a preview of the demand for flu vaccines as Southern Hemisphere areas begin to distribute them over the upcoming weeks in advance of their winter.

“This is just a feeling based on anecdotal observations here in Australia in the lead up to the availability of influenza vaccine in the next week or two [but] there appears to be a high, pent-up demand for vaccine this season so I anticipate it will be the same in the U.S.A.,” Ian Barr, Deputy Director, WHO Collaborating Centre for Reference and Research on Influenza, told AccuWeather.

The CDC did not respond to AccuWeather's inquiry about vaccine production for the coming flu season.

Another COVID-19-related concern: What impact will isolation and social distancing measures in the U.S. and around the world have on vaccine production?

“Barring any unforeseen issues or issues outside of GSK’s control, and based on existing commitments with our customers, we are on track to manufacture and supply the influenza vaccines doses for the upcoming season,” a spokesperson for GlaxoSmithKline replied to AccuWeather in an email.

“As far as I can tell, the COVID-19 pandemic has not had a detrimental effect on vaccine production to date,” Barr told AccuWeather. “This may vary from manufacturer to manufacturer and from country to country as vaccine for the U.S. is made in several countries and impact on workforce and movement of materials may vary between sites. It is impossible to determine at this stage if there will be a delay in the supply of vaccine to the U.S. or other global markets for the 2020-21 influenza vaccine season.”

Levy is optimistic the CDC will make plans to handle the perhaps urgent and increased demand this fall. “They have time,” she told AccuWeather. “If I’m thinking about it, they sure are. They should be able to anticipate this and set up a process for it.”